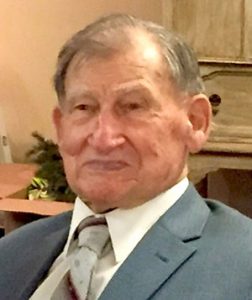 Born on December 8, 1926 in Osceola Mills, PA he was the son of the late Nicholas Wasilko and Anastasia (Gudzon) Wasilko.  He married Pauline (Patrick) Wasilko on October 8, 1955 in Ramey, PA, she preceded him in death on August 25, 2014.

He was a member of the Saint Mary’s Annunciation Ukrainian Church in Ramey, PA.

the American Legion in Osceola Mills, PA and Our Lady of the Valley K of C in Houtzdale, PA.  He was a retired heavy equipment welder for K & J Coal Company and had obtained his GED.

In addition to his parents and wife he was preceded in death by: one son, David Wasilko; three sisters, Anna Mackiewiecz, Mary Temo and Helen Rerko; and one brother, Michael Wasilko.

Military Honors will be accorded by the Osceola Mills Honor Guard at the cemetery.

Visitation will be private at the convenience of the family.